Life today is frantic; change is perpetual; the desire to be better, quicker, smarter, safer is one of the few constants. But as quickly as life changes, some things will always stay the same.
Sport is also in flux, but what grabs our attention and stokes our passion is legacy. Whether it’s a team’s past, a player’s journey or a tried-and-tested practice, the heart-beat of sport is how players, coaches and fans draw inspiration from and honour those who have gone before. For Mark and Headrite Sport, what has gone before is a love of football passed from father to son, a washing line, pillow case and one young boy’s dream of being like his Brazilian heroes. For centuries, sport has embodied the best of human nature. It encapsulates the human quest to be the best. We achieve this by learning from the past, adapting and improving the methods handed down from one generation to the next.

We all share these memories of a devoted parent or cherished coach, passionately instilling in us the subtle skills of our sport, underpinned by their fierce desire to see us fulfil our potential.

Mark Herrick, the founder of Headrite Sports, knows the importance of history in sport. He is uniquely positioned to marry the best coaching techniques with player welfare. He is the son of a professional footballer and he himself played professionally in England, Scotland and Ireland. He is a leader, captaining his sides and inspiring those around him to follow their sporting dreams. He is a school teacher and coach. Most importantly, he is a father. He wants all players to pursue their footballing dreams with the same determination he did, but he wants them to be protected as best as possible from the rigours demanded by repetitive heading in training and in matches.

Mark’s defining characteristic as a footballer was his forceful presence in the air. Heading the ball didn’t come naturally to him. Indeed, it doesn’t come naturally to any player. It demands focused and constant practice. Hour after hour, ball after ball, jump after jump.

As a boy, Mark was inspired by footage of the great Brazilian team of the 1970’s practicing their timing. They suspended footballs by rope from the overhang of a football stand and used the undulating footballs to perfect their timing, meeting the swinging ball with a firm, confident header. Like every boy, Mark wanted to emulate his heroes. So, far from the sun-soaked, glamour of a Brazilian football stadium, Mark suspended a ball in a pillow case from a washing line on the wild west coast of Ireland and he spent countless hours, and far too many pillow cases for his mother’s liking, perfecting his heading technique and imagining his days in the sun as a professional footballer.

The only thoughts going through his young mind concerned being the best header of a ball he could be. Achieving that competitive edge fuelled his relentless determination to master the beautiful collision of a football’s flight and a player’s skilfully timed leap.

Now Mark knows only too well the real importance of what he learnt from his hours learning good, explosive, precise and safe heading technique. Player injury and concussion are a looming spectre in the world of football at the moment and it’s not going away. Headrite Sports is the best and safest response to this growing concern. Their approach is rooted in Mark’s own journey. They have learnt from the past and have adapted it to provide players the chance of being ahead of the game, but always prioritising their safety. 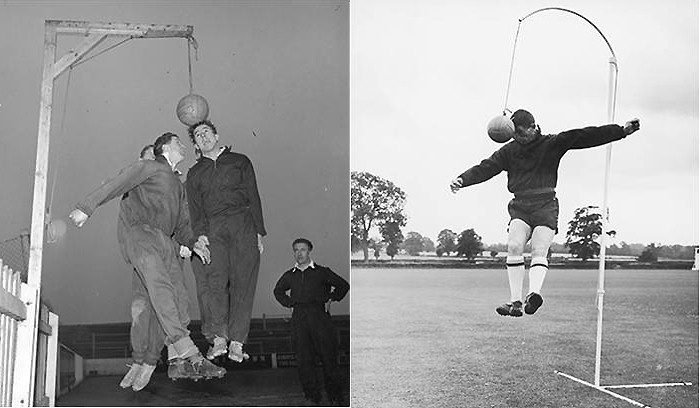 Suspending a football from something is not a new way of training, Coaches have been using this method for decades, with crude DIY methods. The image on the left is Leyton Orient in 1956 & Wolverhampton Wanderers on the right.
1960
1960 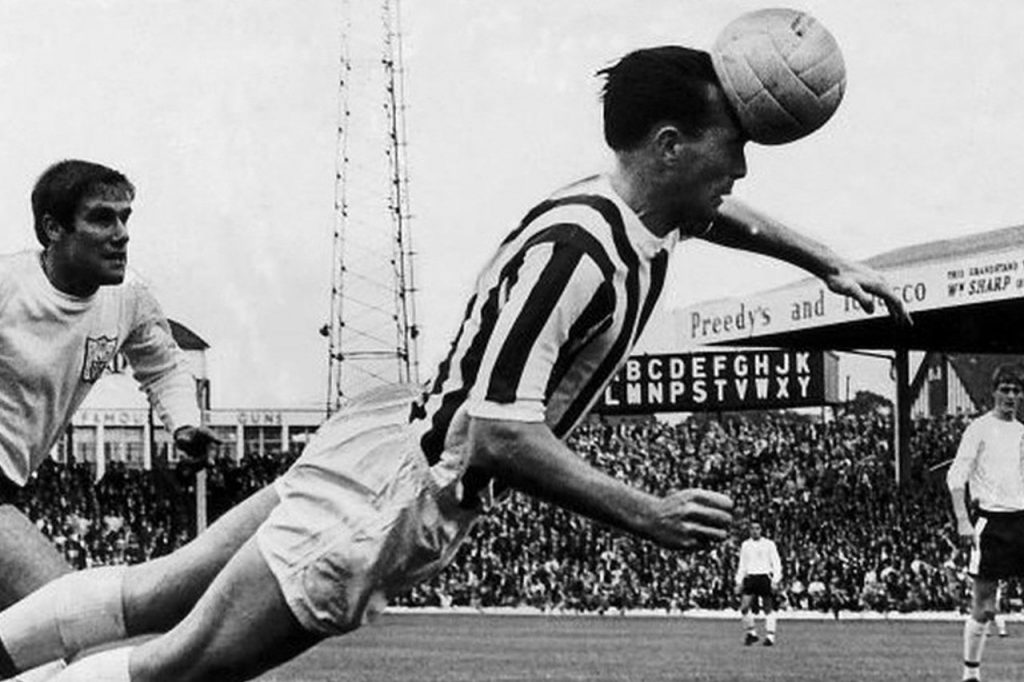 Some of the great headers of the ball would later go on to pay the price. Ex West Brom great Jeff Astle died aged 59. The cause of death was a degenerative brain disease that had first become apparent as much as five years earlier. He had been described as an exceptional header of the ball, and the coroner found that the repeated minor traumas had been the cause of his death. This was not the first case of a footballer's illness or death (particularly in the form of Alzheimer's or dementia type symptoms) being connected to heading footballs.
1970
1970

Santos practicing headers with innovative training method. Pele was one of the greatest ever headers of the ball. As the clip eludes to, being able to jump and head the ball requires precision timing.
1980
1980 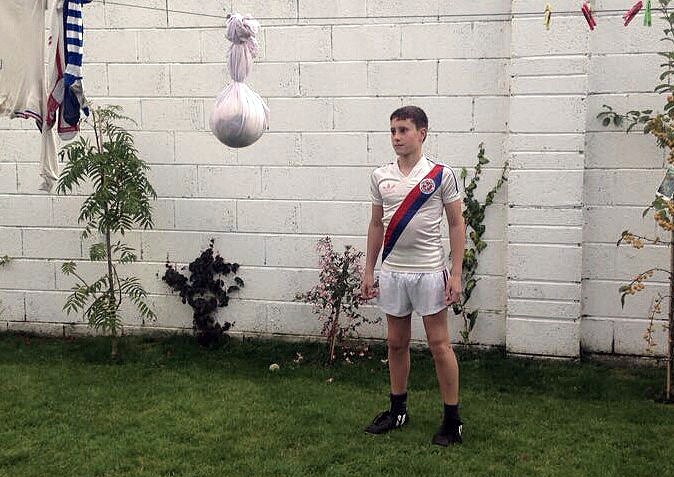 Mark Herrick (future founder of Headrite Sports) suspended a football in a pillowcase, from his washing line and practiced jumping and heading in order to improve his timing. It soon became evident that there was a difference between heading a ball and jumping and heading.
1990
1990

His timing improved significantly and before long he became a professional footballer spending 4 years in England and Scotland with Peterborough United and Raith Rovers. Mark returned to Ireland to play professionally and semi professional football in the League of Ireland for 12 years. His timing ‘in the air’ stayed with him throughout his career.
2015
2015 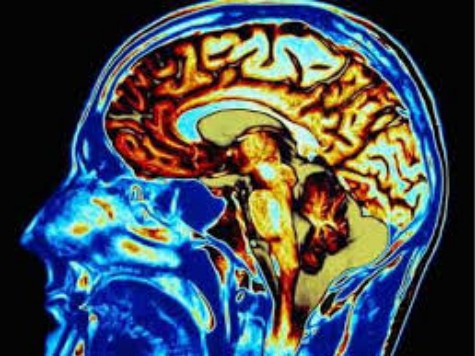 However due to significant concerns associated with the potential long term damage that may be incurred from a career of heading footballs, Mark began to develop a frame that was a safer way to practice. This approach was validated with actions taken by The American Soccer federation to limit heading in underage practice.
2016
2016

Coming into the market as the sole provider of safe heading practice, Headrite Sports has introduced a sophisticated training aid that allows players to practice this valuable skill without the heavy head impact of standard training. Headrite Sports aims to bring advanced technology to this form of practice by using smart technology so as to provide coaches and parents with accurate results of performance and safety.
2017
2017 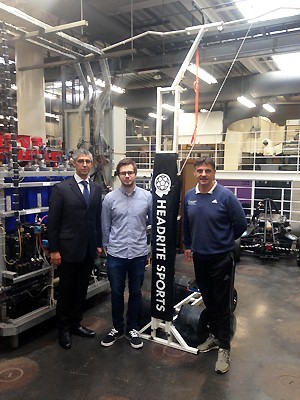